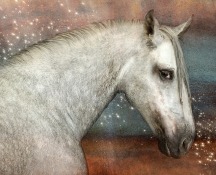 This weeks author interview is with Francisco Cordoba. He has an exciting eight book romantic, suspenseful, paranormal series called, The Horsemen of Golegã coming out this year. Francisco also publishes humorous and strange erotica under the pen name, D. de Carvalho. As Carvalho, he published Hot Pink Heels and has a novella called, Hot Pink Dragon coming out in February of this year. He loves Bach, The Moody Blues, and equines. The Old Masters of classical horsemanship is a passion he talks about a lot. His only hate in life is when people misspell the word Houyhnhnm.

Have you written works in collaboration with other writers, and if so: why did you decide to collaborate and did it affect your sales?

Francisco: I worked very closely with my wife when developing The Horsemen of Golegã series. That was definitely a collaborative effort.

But doing it with another writer, someone not so closely attuned to me, is something I haven’t done with the intention of producing anything to sell. I don’t know how that would work out. I do collaborative writing exercises with writing buddies, but that’s as far as it goes.

That’s not to say I might not try it in the future.

Writing with a partner can be a lot of fun, or it can be a nightmare. When you finish a story, do you proofread/edit all your own work, or do you get someone to do that for you?

Francisco: I pretty much do it myself. When I workshop a piece, another kind writer will point out the odd typo or grammar boob I missed, but I hate it when that happens because it means I didn’t do my job right. I teach grammar and writing for a living, so if I mess up, I do rather take it to heart.

Do you read much and if so, who are your favorite authors.

Francisco: I read constantly, although right now I rarely read my favorite authors. I spent years immersed in the classics. I wrote like I did, too. When I realized that writing like Charlotte Bronte or Herman Melville was unlikely to sell books, I headed to Amazon armed with my kindle. I have a constant supply of current popular romance and erotica that I get through bookbub for free. Some of it’s good, some of it isn’t, but it keeps me abreast of current trends and writing styles which I then meld into my own.

Which writers inspire you?

Francisco: I love the classics and admire the authors who wrote them. Mary Shelley and the Bronte sisters really stand out for me. But any number of older and modern writers also have my admiration. In no particular order: Herman Melville, John Steinbeck, Robert Heinlein, Tolkien, Georgette Heyer, Jean Plaidy, Isaac Asimov, Aldous Huxley, Ray Bradbury, Stephen King, O. Henry, Anton Chekov. Yeah, it’s a mix, and it’s endless.

Sounds like a library I’d love to visit. I like to relax with Stephen King myself. How do you relax?

Francisco: I read. I write. I hold my wife. I hang out with my son. I play with my dogs and horse.

What a great way to unwind. Thanks so much for stopping by and giving us a peek into your writing.

A passionate romantic and obsessive equestrian, Francisco Cordoba has been writing for as long as he can remember. However, it’s only in the last few years, since completing his Master’s Degree in Linguistics, and suffering regular chastisement from his wife, that he has dared to fully unleash his muse. He loves writing about romance, relationships, adventures and sex.